In May 2016 Ethicon Inc., a Johnson & Johnson subsidiary, announced a voluntary withdrawal of its Physiomesh Composite Mesh. The withdrawal was issued after the Physiomesh patch was found to have higher than average revision rates. Specifically, two independent hernia registries suggested patients who received an Ethicon Physiomesh suffered higher rates of recurrence of a ventral hernia compared with patients who received other meshes.

According to a letter issued by Ethicon, the Physiomesh Composite Mesh was removed following an analysis of unpublished data from two large independent hernia registries. Information from the Herniamed German Registry and the Danish Hernia Database showed that the recurrence rates after laparoscopic ventral hernia repair involving Ethicon Physiomesh were higher than in patients who received comparable meshes. 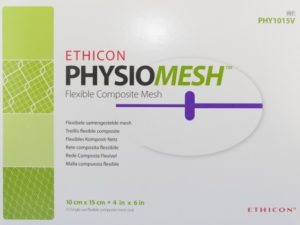 “Based on the currently available data, we believe the higher rates to be a multifactorial issue (including possible product characteristics, operative and patient factors), but we have not been able to fully characterize these factors,” Ethicon wrote in its letter. “Consequently, we have not been able at this time to issue further instructions to surgeons that might lead to a reduction in the recurrence rate and have decided to remove ETHICON PHYSIOMESH Composite Mesh from the global market.”

Patients who already have Ethicon hernia mesh implanted are not affected by the Ethicon Physiomesh recall, though they are cautioned to follow up with their physicians if they experience symptoms of complications. Healthcare professionals were encouraged to find and remove the affected product to prevent it from being implanted in new patients.

What is Ethicon Physiomesh?

Ethicon Physiomesh is a hernia repair patch made from flexible polypropylene woven into a fabric. It is used to help patients who suffer ventral hernias—hernias that occur when tissue bulges through a weak spot in the abdominal wall. The Ethicon Physiomesh patch is used to push the organs and tissue back into the abdomen and hold them in place, creating a stronger abdominal barrier that is meant to prevent internal organs from pushing through the weakened area.

According to court documents filed in relation to a lawsuit, the design of the Physiomesh includes five separate layers: two layers of polyglecaprone-25 (“Monocryl”) film, which covers two underlying layers of polydioxanone film, which in turn cover a polypropylene mesh. Physiomesh is reportedly the only type of hernia repair product to use such a design. The design was meant to prevent adhesion and improve the incorporation of the mesh into the patient’s abdomen.

“Instead, the multi-layer coating prevented adequate incorporation of the mesh into the body and caused or contributed to an intense inflammatory and chronic foreign body response resulting in an adverse tissue reaction including migration and damage to surrounding tissue in the form of sclerotic, granulomatous and/or fibrotic tissue and improper healing,” court documents note.

What are the Concerns About the Physiomesh?

Use of the Ethicon Physiomesh has raised a number of concerns, including that the Physiomesh can fail to properly adhere to a hernia, that it can improperly adhere to internal organs, that it has a high rate of recurrence of a ventral hernia, and that some patients have required revision surgery to remove and replace the Physiomesh implant. Unfortunately, some patients allege that despite having surgery to remove the mesh, improper adhesion to internal organs has meant not all of the mesh could be removed.

Among the issues raised in at least one hernia mesh lawsuit are that the coating of the implant prevents fluid from escaping, which can cause seroma formation, which can itself cause infections, abscesses, and other complications. Furthermore, the design of the Physiomesh can allow bacteria that cannot be eliminated by the patient’s immune system to grow, further increasing the risk of infection.

Finally, plaintiffs allege that the polypropylene mesh layer of the Physiomesh was not strong enough to survive normal wear and tear, which allowed recurrent hernias and/or ruptures to occur.

Who is at Risk of Ethicon Physiomesh Complications?

What are the Symptoms of Physiomesh Complications?

Patients who had laparoscopic surgery to repair a ventral hernia and received an Ethicon Physiomesh should be on the lookout for the following symptoms of complications and contact their physician immediately should any symptoms arise:

Yes, a lawsuit has been filed against Johnson and Johnson subsidiary Ethicon, alleging the Physiomesh caused physical pain and mental anguish to patients. One hernia mesh lawsuit was filed by Connie F. from Georgia, who alleges she underwent surgery for the recurrence of her hernia despite having the Physiomesh implanted. According to her lawsuit, the Physiomesh did not properly adhere to the wall of her abdomen and sections of her intestines pushed through the hernia mesh, resulting in an intestinal obstruction. Although she underwent surgery to remove the Physiomesh, portions of the implant could not be removed and remained in her abdomen.

“Plaintiff Connie Franklin has suffered, and will continue to suffer, both physical injury and pain and mental anguish, permanent and severe scarring and disfigurement, and has incurred substantial medical bills and other expenses, resulting from the defective and dangerous condition of the product,” the lawsuit alleges.

What Should I Do if I Have the Ethicon Physiomesh Implanted?

If you have the Physiomesh implanted and have experienced signs of complications linked to the device, contact a medical professional to discuss your options. If you have not experienced complications, follow up with your physician to determine how your medical situation should best be monitored.

If you have experienced complications linked to the Physiomesh, you may be eligible to file a lawsuit. Contact a Physiomesh lawyer to discuss your legal options.