One of the top-selling antipsychotic drugs In the United States, Abilify has recently been linked to the loss of impulse control and compulsive gambling.

As a result, the manufacturer, Bristol-Meyers Squibb is facing litigation for failing to warn about the risk of Abilify impacting an individual’s impulse control.

Our investigating lawyers are accepting and reviewing cases for people throughout the United States who have suffered an Abilify induced injury.

Abilify (aripiprazole) is an antipsychotic drug (atypical type) prescribed to millions of Americans each year. Manufactured by Bristol-Myers Squibb and Otsuka Pharmaceuticals in 2002, Abilify is used to treat symptoms of psychotic conditions such as schizophrenia and bipolar disorder (manic depression). It works by assisting to restore the balance of certain neurotransmitters (natural chemicals) in the brain.

Abilify can be used as an add-on to treat depression in adults when one antidepressant does not suffice. It can also be prescribed to treat symptoms of irritability associated with autistic disorders in pediatric patients of 6 to 17 years of age. Abilify was approved by the FDA (Food and Drug Association) in 2012.

Although considered a popular treatment for mental health disorders, Abilify has recently been linked to compulsive behavior side effects such as excessive shopping, overeating, hypersexuality and compulsive gambling.

While it attempts to restore the balance of neurotransmitters in the brain, Abilify adds influence on dopamine serotonin receptors. Dopamine assists in the receptivity of pleasure and motivation and plays a central role in the pleasure center of the brain. Therefore, inordinate amounts of dopamine may influence compulsive behaviors such as gambling.

The makers of Abilify were instructed to update its prescribing information to include a warning about the strong impulse to gamble by Health Canada in November of 2015. Disturbingly, no such warning exists on the prescribing labels for Abilify sold in the United States. Abilify has been linked to impulse control problems for some years now. 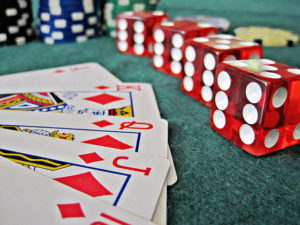 There have been a considerable number of reports whereby patients taking Abilify developed a compulsive gambling habit. Interestingly, in all these reported cases, the addiction or habit of gambling ceased when the patient stopped taking Abilify.

Abilify Gambling behaviors due to unforeseen side effects can leave a disastrous mark on an individual’s life. Such side effects can lead to a hefty debt, unemployment, damage to savings, emotional trauma and in some cases maybe even divorce. The lack of prescribing labels for Abilify compulsive gambling can have a considerable impact on a person’s life.

Herein lies the issue, the makers of Abilify failed to warn its consumers or provide prescribing labels for the side effects of compulsive gambling.

Due to this failure, users of Abilify are now reportedly left with the ordeal of overwhelming losses to their physical, financial and emotional health.

Rather than consolidating individual claims into a representative claim or a class action, our law firm and everyone is filling an independent lawsuit. With no impudence towards class action lawsuits, our lawyers believe that by filing individual Abilify lawsuits, we can better advocate for our client’s legal interests and financial losses.

If the makers of Abilify were to provide sufficient warnings about the risk of compulsive gambling to its users, long term damage could have possibly been avoided by the consumers of Abilify.

Our lawyers seek to provide justice for this negligent act that has been introduced by the makers of Abilify. In their desire to increase sales, Bristol-Myers Squibb, and Otsuka Pharmaceuticals have neglected the safety, health and well-being of their customers.

Our lawyers are accepting and reviewing individual Abilify injury claims. If you or a loved one have suffered compulsive gambling due to the use of Abilify, contact our investigating lawyers now.